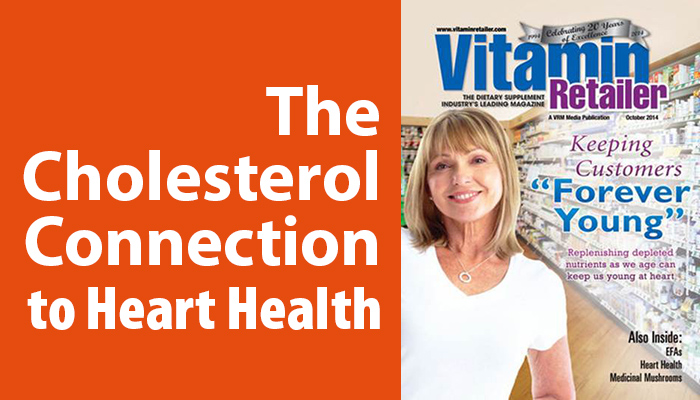 The following passage appeared in the October 2014 issue of Vitamin Retailer magazine.

As purveyors of dietary supplements, no doubt retailers receive a steady influx of middle-aged men and women who have recently become more concerned about lowering and/or managing healthy cholesterol levels. This is typically inspired by routine physician testing that reveals unfavorable ratios of low-density lipoproteins to high-density lipoproteins and total cholesterol.

When it comes to matters of the physical heart, “cholesterol” is the association most people make about their cardiovascular status. Beyond being prescribed daily doses of statins, the great news is that currently available dietary supplements, as well as an ever-increasing variety of tasty and much healthier foods and beverages (as part of a managed wellness lifestyle) have been linked to improved cholesterol levels, as well as overall cardiovascular status.

“Cholesterol is a big problem in the U.S.,” observed Jerry Chou, CEO of California-based HERBTHEORY. “Our diets are far from perfect and cholesterol has become a ‘buzz word.’ Our doctors tell us that we need to watch our cholesterol levels; this, in turn, pulls cholesterol management to the front of our minds.”

Heather Manley, ND, advisor to Nordic Naturals (Watsonville, CA), explained that cholesterol is a lipid normally produced in the liver. “Cholesterol is located on the outer layer of every cell, and is an important component to everyday body functioning, such as: building healthy outer cell membranes, acting as a gatekeeper to allow certain things and keep other things out of the cell membrane, aiding in the production of hormones released from certain glands, and insulating nerve fibers.

“Of all the cardio-care supplements, those aimed at supporting healthy cholesterol levels remain top of mind and sought after. And this is likely to continue as it is widely known among consumers that elevated total cholesterol and particularly LDL-cholesterol have long been established risk factors for coronary heart disease, explained Michelle Braun PhD, senior researcher at DuPont Nutrition & Health in Missouri. “Since elevated LDL cholesterol increases the risk of developing cardiovascular diseases (CVD), it comes as no surprise that consumers are now focusing on supporting healthy cholesterol levels,” she said.

Manley agreed. “Media plays a large role in advertising and gives people the sense that the only way to maintain healthy cholesterol levels is with pharmaceutical medicine,” she emphasized. As with all diseases and conditions, she pointed out, regaining health is an integrative approach that is most successfully and effectively addressed by a combination of conventional and alternative approaches. In the retail environment, “it is always necessary to inform customers about the importance of having their doctors on-board with any decision they make regarding both pharmaceutical medicines and supplements.”

Beyond pharmaceutical heavyweights such as Crestor, Braun added that cholesterol-concerned consumers are encouraged by their physicians to incorporate and practice lifestyle changes such as reducing their consumption of saturated fats, trans fats and cholesterol, maintain a healthy weight and moderate physical activity — all of which are widely acknowledged strategies to attain a healthier blood cholesterol balance.

“Further, dietary interventions that include increased intake of plant sterols, soluble fiber, and soy protein are also often recommended to enhance blood cholesterol reduction,” she stated. “The observed effects of including these ingredients in a daily healthful diet can be clinically relevant. On the basis of epidemiologic studies conducted in the U.S., it is estimated that for every one percent decrease in serum cholesterol there is a 2-3 percent reduction in the rate of coronary heart disease.”

According to Gene Bruno, MS, MHS, director of category management with New York-based Twinlab, research suggests that consumers are aware that dietary supplements can have a positive impact on maintaining healthy cholesterol levels already within normal ranges. For example, he cites, the 2012 Gallup study of the U.S. market for vitamins and other dietary supplements confirmed that cardiovascular-related supplements are more frequently associated with maintaining healthy cholesterol (43 percent) than supporting heart health (38 percent) or helping to maintain healthy blood pressure (37 percent).

And due to recent changes in guidelines that has many new people on statin therapy, your cholesterol-support inventory will be more heavily visited and surveyed by consumers than ever.

A new study from UT Southwestern found that the recently-introduced cholesterol guidelines would significantly reduce new cardiovascular events when compared to treatment based on previous cholesterol guidelines, according to a university release. The previous guidelines from the National Cholesterol Education Program/Third Adult Treatment Panel were based on a different formula that involved targeting specific cholesterol levels. The 2013 ACC/AHA Cholesterol Guidelines recommend statins for patients with existing atherosclerotic cardiovascular disease, type 2 diabetes, and very high levels of LDL cholesterol, as well as for patients with a high 10-year risk for heart disease. According to UT Southwestern researchers, some patients fall out of statin eligibility under the 2013 guidelines; however, approximately 12.8 million more are now eligible.

The study, led by Dr. Amit Khera, associate professor of internal medicine and director of the preventive cardiology program at UT Southwestern and published in August 2014 in Circulation: Cardiovascular Quality and Outcomes, reviewed a subset of patients enrolled in the Dallas Heart Study who would have newly qualified for statin prescriptions under the new guidelines. The study predicted that 3.6 to 4.9 cardiovascular events would have been prevented for every 1,000 people screened and treated according to the new guidelines rather than the old guidelines.

“This is one of the first studies to carefully predict the implications of the new guidelines in the general population beyond just the amount of increase in statin use,” said Khera.” Does it look like these new guidelines will prevent heart attacks and strokes? The answer is, ‘yes.’”

The reality is, for those people living with unhealthy or dangerous cholesterol levels and on statins, there is no “naturals versus synthetics” argument — as some industry people believe in statin therapy, at least in the beginning.

“The most compelling result of recent clinical trials on cholesterol management is that the only significant causal association between cholesterol lowering and reducing risk for CVD is by treatment with statin drugs,” explained Galvez. “This means that only statin treatment has been shown to lower LDL cholesterol and reduce the risk for CVD. All other cholesterol-lowering treatments, such as reducing absorption of cholesterol from the diet and reabsorption of cholesterol from the bile through the small intestine, may lower cholesterol levels but do not reduce the risk for CVD. The proposed explanation for these clinical results is that the LDL cholesterol produced in the liver has more probability of being oxidized than the cholesterol absorbed through diet and bile. The oxidized LDL gets absorbed by macrophages in the arteries and eventually forms into plaques to cause atherosclerosis.”

Reliv International’s LunaRich® products, said Galvez, “are the only nutritional products on the market that have a similar mechanism of action to that of statin drugs.” He explained that lunasin, a naturally occurring soy peptide—and the bioactive ingredient in LunaRich — reduces the expression of the HMG-CoA reductase gene through a patented epigenetic mechanism of action. “Lunasin binds to the histone H3 tail and inhibits H3-lysine 14 acetylation by the PCAF enzyme. HMG-CoA reductase is the rate-limiting enzyme for cholesterol biosynthesis and the enzyme that statin drugs inactivate. Although affecting the enzyme, lunasin differs from statins by reducing only the expression of HMGCoA reductase, not competitively inactivating the enzyme as statins do. This means that functional HMG-CoA reductase enzymes remain after lunasin consumption, although in lesser amounts, which in time leads to reduced LDL cholesterol levels. However, unlike statins with numerous side effects, including increased diabetes risk, muscle weakness and fatty liver disease, lunasin does not have side effects.”

Because the cholesterol guidelines have changed and more people are on statin therapy, your cholesterol-support section will be receiving a lot of attention—and numerous questions, notably if the supplement he or she is interested in taking is safe with statins. Here, it is advisable to encourage the consumer to disclose the use of it to his/her cardiologist, as well as to direct him or her to the brand’s website for self research, and, potentially offer either a moneyback guarantee or store credit if he or she gets cold feet or an abject denial of the supplement from the cardiologist.

In addition, point out to cholesterol support-seeking consumers that the journey to regain healthier cholesterol levels is all about healthy habits—which is the very essence of your business — and give them a store tour, showing the healthier foods and beverages as well as organic produce. You may make new customers for life!

Click here to read the full magazine article (on page 40).